Hope for Recovery from Concussions 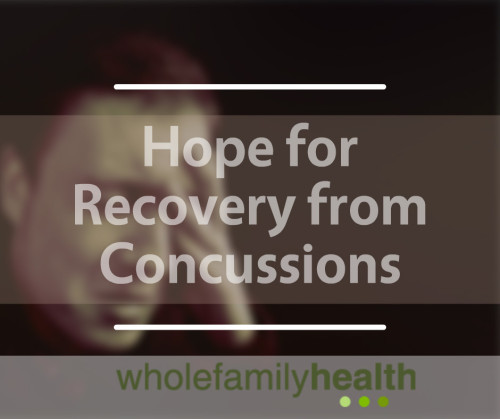 I’m sure you know someone who has suffered from a concussion at some point in time. Concussions are unfortunately relatively common, with an estimated 1.6 million to 3.8 million concussions occurring each year in the United States.

What exactly causes a concussion? A concussion occurs when the brain moves or rotates rapidly within the skull, causing damage to delicate nerve pathways in the brain. This is typically brought on by a blow to the head, or an impact to another part of the body that transmits to the head. A concussion results in a loss of consciousness only 10 percent of the time or less, and some symptoms aren’t noticed until one or two days after the injury. In some cases, brain imaging reveals structural damage, but most often there is no noticeable structural damage even though there may be obvious effects on neurological function, such as headache, confusion, dizziness, fatigue, amnesia, sensitivity to light, sleep disorders, etc.

In Canada, concussions seem to occur most commonly in teenagers, often associated with sports, and in adults 50 years old and up. The Sports Concussion Institute reports that “high school athletes not only take longer to recover after a concussion when compared to collegiate and professional athletes, but they also may experience greater severity of symptoms and more neurological disturbances.” The institute also states that “because the frontal lobes of the human brain continue to develop until age 25, it is vital to manage youth concussions conservatively to ensure optimal neurological development and outcomes.” Thankfully there has been increased awareness in recent years about prevention and early detection of concussions, but as former professional football player Ricky Williams says, “no one is talking about treatment.”

Of all sports, football poses the highest risk of concussion for boys and men, with professional football players typically receiving 900 to 1500 blows to the head in just one season. As a result, many professional football players are diagnosed with post-concussion syndrome. Conventional treatment for this condition mostly involves medications prescribed for symptom management until the body can heal on its own. There is very little that is available, in conventional medicine, to expedite the healing process. So in the summer of 2009, professional football player Ricky Williams sought help elsewhere. He says, “During the summer before the 2009 football season, I went through the CranioSacral Intensive Program at The Upledger Institute looking to deal with some nagging physical complaints I had from past injuries. I ended up getting the relief I was looking for and much more. I credit much of my well-being and my 1000 yard season to the multi-modality manual therapy program I experienced at Upledger.”

This experience ultimately inspired a partnership between The Ricky Williams Foundation and The Upledger Foundation for a pilot study examining the effects of manual therapies on the well-being of former football players with post-concussion syndrome. Five former professional football players who were diagnosed with post-concussion syndrome received manual therapy treatment twice a day for five days. Various health measurements and surveys were conducted before and after the treatment period, as well as three months after treatment concluded. Improvements were noted in overall quality of life, reduced pain, increased range of motion in the neck, increased sleep time, and reduced depression-related symptoms. In fact, even three months after treatment, improvements continued in relation to depression, quality of life, sleep duration, cervical range of motion and gait.

This was only a pilot study, with a small number of participants, but the findings are promising, and hopefully a larger study with a control group can be undertaken in the future. In the meantime, Upledger Craniosacral Therapy is a safe, gentle, low risk therapy that shows promise in the treatment of concussion-related symptoms. To find out more about Upledger Craniosacral Therapy and how it can help you or a loved one, please read more here.

If you have any questions at all about how acupuncture and Chinese Medicine can help your family, contact us today!

We will be celebrating baby’s first birthday and first Christmas and we will never forget the role you played in bringing our sweet baby to us! Thank you for always listening and showing me that glimmer of hope even when it seemed like there was none. You are such a gift to many!

Found the class overall to be very relaxing and restorative. Tea and atmosphere made the experience warm and hospitable. – Fertility Yogapuncture Participant

You have taught me a lot about family– and community. And what is and is not “a thing” in Chinese medicine. You are a bright star in my healing firmament. My shoulder is 99% fixed and I will book in to see you before I leave.  – W.

I delivered two baby boys that day. Oliver 6lb 6oz and Matteo 6lb 3oz. Born just past 37 weeks!. Thanks again for helping relieve the aches and pains of this extra weighty pregnancy!