How and Why Gluten Wreaks Havoc on our Bodies 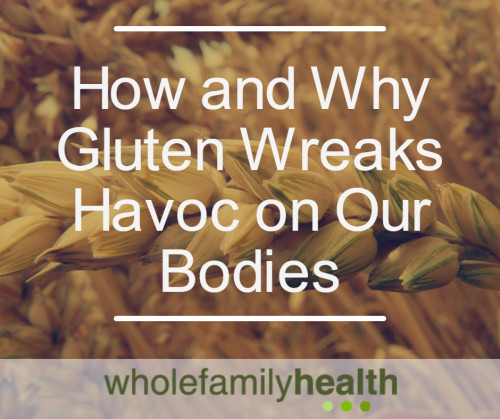 Why is gluten such a problem now??

To put it simply, we’re no longer eating the wheat that our parents ate.

In order to have the drought-resistant, bug-resistant, and faster-growing wheat that we have today, we’ve hybridized the grain. These “new proteins” are part of the problem that has lead to increased system inflammation and intolerance of gluten. In our modern fast-paced world with fast food at our fingertips, we’re eating much more wheat than our ancestors ever did.

How does our body react to gluten?

As things make their way through your digestive system, your gut-associated lymphoid tissue (GALT), which is the term for the immune system in your gut, reviews everything to check for potentially harmful substances. In people who have no issues with gluten, this process goes smoothly and the food is absorbed. In those with gluten sensitivity, the GALT identifies gliadin as a dangerous substance and produces antibodies to attack it. In celiacs these antibodies don’t just attack the gliadin, they attack the tTG as well, which is what originally broke down the gluten into its two parts.

What is tTg?
This enzyme, tTG, has a number of jobs, but one of its most important contributions to the body is holding together the microvilli in our gut. Your body collects nutrients by absorbing them through the walls of your intestines, and the more surface area there is, the more they can absorb. Imagine trying to soak up a gallon of water with a paper towel versus a bath towel. Microvilli, which look like hairy fingers, exist in your intestines to increase the surface area and absorb nutrients.

When the antibodies your body produced to defend itself against gliadin attack your tTG, these microvilli can atrophy and erode, decreasing your ability to absorb nutrients and allowing the walls of your intestines to become leaky. This blunting of the microvilli is the hallmark of celiac disease, which is an autoimmune disease.

What is the link between gluten, systemic inflammation and autoimmune disease?
Unfortunately, these antibodies often confuse more than just tTG for gliadin, and end up attacking other organs and systems, from the skin to the thyroid to the brain. This is why gluten sensitivity is so frequently paired with autoimmune conditions, and why those with celiac disease are at risk of developing a second autoimmune disease.

Gluten is causing your body to attack itself, sometimes on multiple fronts. The fact that something you eat is causing an issue for you outside of your digestive system, such as rheumatoid arthritis or autoimmune thyroid, is why many people go so long without realizing they have a problem with gluten. If you have an autoimmune disease you should get tested for gluten sensitivity, and if you’re gluten intolerant you should get screened for autoimmunity.

Can acupuncture help with celiac disease?
Currently, the only treatment recommended across the board is a gluten-free diet. On such a diet, many celiacs experience a reversal of their symptoms, and the body often heals itself. Your body’s process of eliminating gluten from your body can take months, which is why individuals need to be diligent, patient and committed when choosing a gluten free diet.

While your body is essentially “detoxing” you will likely still experiencing symptoms like gas, bloating, pain/cramping, itchy/dry skin and sluggishness, but over time, these symptoms will hopefully go away. However, the longer a celiac goes undiagnosed and untreated, the more damage any ingested gluten does to their system. In other words, sometimes maintaining a gluten free diet will not always lead to complete symptoms relief.

Chronic digestive weakness may be mitigated through acupuncture. As mentioned before, many celiacs experience a severe deterioration of the intestinal villi which can lead to not only poor digestion, but also to a plethora of food sensitivities. Acupuncture may be able to speed up the body’s healing process and give significant relief of gas, bloating/pain, cramping and fatigue. Individuals looking to explore the possibility of acupuncture help with celiac disease should utilize this treatment for specific symptoms and to speed up the healing process of your gut, it however, should not be viewed as a cure for celiac disease.

The idea that a gluten-free diet will bring on immediate relief to a celiac sufferer does not represent the vast majority of cases. In most cases, the body needs to heal and this can take an extended period of time. Once gluten has been removed from the diet, vitamin and herb therapies, acupuncture, and many other alternative forms of medicine may be useful in facilitating the healing process. These supplemental treatments would yield little good while the patient is still consuming gluten, as any positive effects would soon be overwhelmed by the continuous damage of gluten-containing foods.

If you have any questions or would like to schedule an appointment, please feel free to contact us!

I am so grateful that our paths crossed & that I was able to share some pace and time with you. Your beautiful way of being has been so reassuring & affirming!

Catherine is amazing and knowledgable. I feel like she truly cares about my health and is invested in my healing.

Hi Christina, Thanks for all the help and suggestions….I really appreciate your support and knowledge. I am doing well and started ovulating, I’m so happy it’s regulating thanks to you!

Christina, I just wanted to say thank you so much for all your support and help through our journey. I still recommend you and Whole Family Health all the time!! I am a true “believer” in acupuncture and all the benefits it comes with! I know I will be back one day 🙂 Thank you!