The Skinny on Eggs 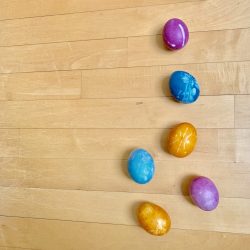 Did you know that an egg is considered a single cell when unfertilized? Technically, it’s the yolk that is considered the largest cell on earth. (The yolk of an ostrich egg, to be exact). Crazy pants.

An egg cell can give rise to any other type of cell, and is basically designed to support the development of an entire whole new animal. Not entirely new news, but somehow amazing to stop and think about.

All to say, for being so affordable, eggs are super nutritious- jammed full of 18 vitamins and minerals, high in protein and important lipids, namely mono and poly-unsaturated fats.

Research shows that despite their past denunciation for being high in cholesterol, their other nutrients, including zinc, selenium, retinol and tocopherols actually have antioxidant effects. They help protect us from degenerative diseases, including cardiovascular disease (what eggs have been accused of causing in the past.)

It’s true that they’re high in cholesterol, however, solid research shows that dietary cholesterol has a smaller effect on total blood cholesterol and harmful LDL cholesterol than overall mix of fats in the diet.

Although another study reports that one egg per day is safe, anything beyond could increase the risk of heart failure with age.

That said, in Chinese Medicine, it’s all about each individual’s constitutional landscape.

For example, those with diabetes or heart disease should limit their egg intake. Eggs are also a common allergen, and can cause inflammation and mucus congestion in those who are systemically prone to this.

Ultimately, the middle road and everything in moderation is optimal, and it never hurts to chat with a health professional about what your body’s specific needs are.

Contact us for a free 15 minute consult if you have any questions.

Alda, we will miss you so! You will go down in history as one of the most beloved, special people we’ve met along our journey…sincerely. Your soon-to-be clients are sooo lucky! Thank you for everything– our little guy is awesome and he melts all sorts of hearts.
Lots of Love, J

I appreciate all that you did for my husband and myself. It was such a pleasure being in your care for the past year and a bit. Your patients in Edmonton are lucky to have you! – L.

Just wondering if you could pass along to Christina that we ended up having our baby last week. We are doing well. Just wanted to thank you Christina for being there for support through our ivf and then for labour prep acupuncture.   She is an amazing person and very caring and supportive.

Thank you so much, Christina, for always making me a priority and being so supportive and helpful. I can’t tell you how appreciative I am! – E.Y.